When you take it upon yourself to GM a horror game, it’s your job to build a moody experience. If you’ve run a game as a GM before, you know that building mood is a significant task! You share the storytelling stage with the players, and by and large, they react to the game elements you’ve told them are present. With that in mind, knowing how and what you want to present the players with goes a long way toward maintaining the mood appropriate to a horror session or campaign. The following suggestions aim to help you do that.

Fear is an emotion that comes as a result of the uncertainty of one’s own well being. Characters in a horror game are right to feel fear — some dark force has turned its baleful eye directly upon them!

Every good GM knows to add sensory detail to their descriptions, the better to immerse the players in the setting. Gory detail should be used sparingly, however. Gory detail more often creates revulsion, not fear, and risks replacing the thrill of fear with discomfort. Resist the urge to devote too much attention to the glisten of viscera or what’s dripping from a ghoul’s mouth. While certain parties may appreciate this sort of thing (and, of course, you know your gaming group better than anyone who’s never met them could), be wary of risking their enjoyment of the game by placing too much emphasis on splatter in place of building a mounting mood of horror.

Detail is like a spice. Too much overwhelms the dish. A little goes a long way.

Fear thrives in environments where the mind is left to imagine its ultimate doom. The monster unseen is more fearsome than the monster described. The creaking door, the guttering candle, the faraway howl on the moor: All of these create more fear than revealing what caused them. Ultimately, many questions will be answered and many mysteries will be revealed over the course of a session or campaign, but leaving some time between describing some element of the story and revealing its true nature is the crucible in which horror forms.

This technique works well for everything from small details on up to greater campaign mysteries. Revealing partial information to the players sets their minds to imagining all sorts of worst-case scenarios that help reinforce the mood at the table. Pacing the rate at which you reveal information can trade much on that principle. Introducing strange and incomplete details and allowing the players to ascribe dreadful significance to them lets the players brood upon the unknown. It’s a technique used in mystery stories as well, but it takes on a fearsome gravity when matched with other elements of horror.

Minor details: The creaking door, the guttering candle, the faraway howl on the moor, as mentioned above. Footsteps on the ground floor of the inn (who could be visiting at this time of night?)

Story details: A bloody knife discovered in the refectory. Flashes of light witnessed at the castle on the crag from the village below. The missing servants at the tycoon’s mansion.

Campaign details: The construction of the new crypt on the family estate (because the old crypt filled so quickly…). Learning that the librarian is the seventh son of a seventh son. The brewery is owned by the son of the secret police, and every delivery has an extra barrel unaccounted for on the shipping manifest. 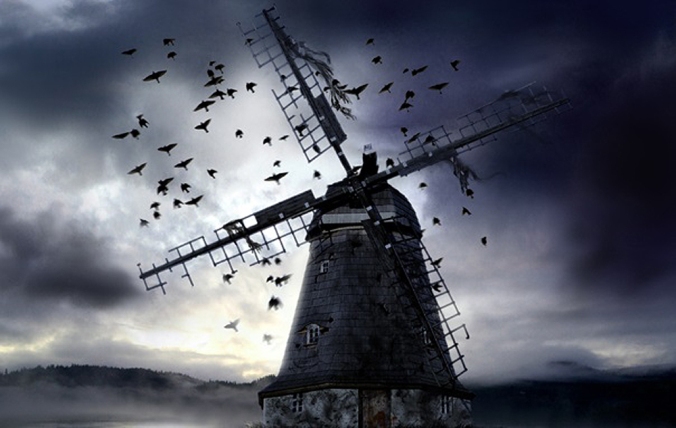 Delivering game descriptions with emphatic repetition indicates to players that the repeated detail is important. The repetition reinforces the presence and normalcy of the detail. It creates a pattern that stands out when it’s broken (which allows you to amplify the dread by the players not knowing what has caused the break in the pattern). It creates a subtle signal that makes players feel empowered when they discover.

The chilly castle has a fire stoked in every room that feebly keeps the cold at bay. The perfect array of bricks in the Boston cellar walls indicates attentive craftsmanship. Every envoy sent by the ambassador has blond hair. When the players explore one of the castle rooms with only smoking embers in the fireplace (who or what put it out?), observes a cellar wall with a single missing brick (what’s behind it?), or receives an envoy from the ambassador who is strikingly bald (why is this fellow different?), their minds work to analyze the the change in the pattern. And this lets their imagination loom, as above.

A clever GM knows when to rely on the purchased or pre-annotated source material, and when to run with the players’ cues. Packaged stories are commercial products, and are generally written to entertain the broadest audiences. Notes written by the GM before the session starts are, at best, projections of concepts that will challenge and entertain the players. But when your session is underway, you’re getting live, real-time feedback for the game events that you can use immediately so that you can tailor further developments to that player response. If your notes say the Duke is secretly the werewolf, but your players have a more significant connection to the midwife, maybe it’s best to change the werewolf’s identity. If the vital clue is in the publisher’s office but the players are having more fun at the mayor’s inaugural ball, consider relocating the vital clue to city hall.

Be careful with this! Ultimately horror revolves around the perception of helplessness. But if players feel that every time they develop an attachment to a character or show an interest in a setting element, the GM turns it against them, they will feel punished for their engagement. Horror relies on hope to contrast the darkness with light, and a sense of accomplishment is critical to maintain even in a horror environment.