Without an objective, a game’s choices lack meaning. It’s the function of the gamemaster to communicate the goals (in a more directed or plot-dependent game) or to clearly define the space in which the players can make their goal choices (in a more open game, such as a sandbox-style campaign). Naturally, players will have a lot of input on what a game’s goals may be. A pack of good-aligned monster hunters will have a very different goal than a crew of booty-hunting pirates, whose goals will be different from a band of rebels or escaped slaves.

It’s also the function of most games to provide enough “signposts” that players can gain a sense of progression through understanding the rules. For example, “gain a level” is a perfectly valid goal in a level-based game, while “gain a new dot in a Discipline” is a valid goal for a more open character progression game like Vampire. 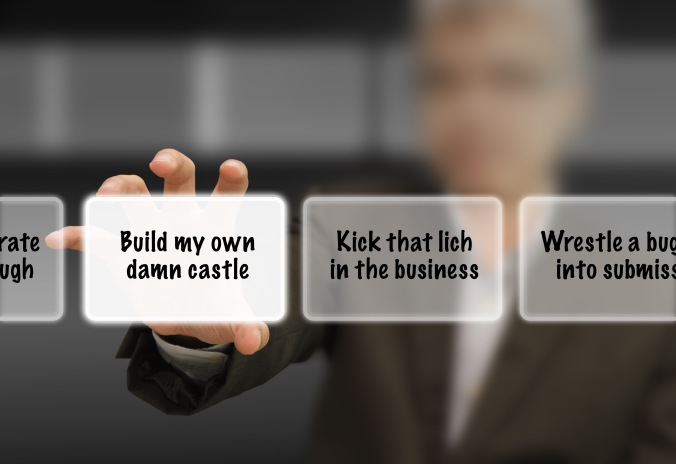 In multiplayer games like most tabletop RPGs, it’s also very likely that a group of PCs may be simultaneously working toward a common goal while they individually pursue orthogonal or even opposed goals. It’s possible that the paladin and warlock both want to slay the dragon, while serving rival gods or patrons. And the Ventrue and Brujah may both have a common enemy in the Tremere Prince but very, very different objectives in mind for how to pursue relations with the Anarchs.

But full circle, the game needs to indicate to the player or allow them to choose what’s next. If a player is wondering “what do I do now?” that may be a lack of information communicated by the GM, an underdeveloped progression system, or a lack of opportunity for the player to compare their choices and decide what’s next.

Manage the information at critical junctures — goals are what inform the player’s actions.

Technique: Prompt your characters to detail a goal their characters wants to pursue. It doesn’t have to be elaborate, they don’t have to provide it on the spot, and it can certainly change over time. They don’t even have to have just one; they may have several, of varying degrees of importance to them. Asking them about their goals gets them thinking about those objectives, however (if they haven’t been already), which puts them on the road toward better understanding their characters, and that in turn lets you better tailor the game to the shared story you’re telling.