Here’s a really simple design for an issue I’ve been looking at a lot: Character sheets can be frightening things. Looking at a single sheet of very-small-sized type and its associated blanks that must be filled in is not a terribly accessible or inviting activity. So, after being called out by Derek Guder, as a design challenge to myself, I thought about a way to make a character sheet that’s easy to read and lets a player know at a glance what the game experience will offer. I’ve been thinking about this a while, so it was a chance to turn doodles into something actionable.

@jachilli It’s rare to see someone push through the a new idea in that realm. Do you know how’d you’d tweak it?

I think this would work really well for narrative- or setting-focused games like Vampire (especially one-shots), Call of Cthulhu, or GUMSHOE, or maybe even power something like a tabletop trip through The Legend of Zelda or Shadow of the Colossus.

It begins with the following single premise to simplify game interaction that reduces the volume of information on the sheet itself.

That is, a character has a number of health units and each unit of health carries with it a special ability of the character. So, as the character loses health, the character also loses the ability to affect the game world and other entities in it.

So, for example, the following character has three health levels, and the abilities of Vanish from the Mind’s Eye, Command, and Poisonous Blood. When the character has suffered no damage, she can use any of those abilities. 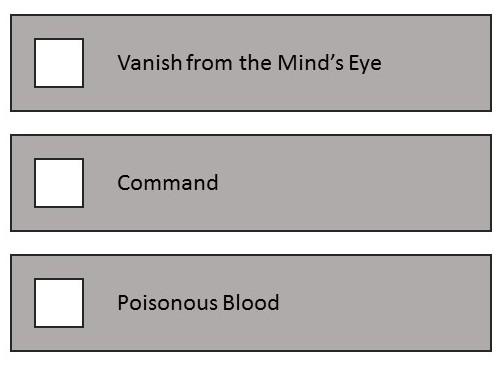 When the character does suffer damage, the player marks off health units from the top, and loses any abilities for which that health level has been marked off.

So, back to the example, the character has suffered one health level of damage, and has also therefore lost the ability to use Vanish from the Mind’s Eye.

That’s it. The sheet and a suggestion of the game in just a few geometric shapes and text keywords.

Calling the health units health suggests physical conflict or wellness, but that doesn’t even have to be true, especially in settings that don’t rely on combat, or where physical combat is simply one facet of a more holistic system of conflict resolution.

From Death Comes to Pemberley

This could just as easily be set at Pemberley, with units and ability loss themed as exhaustion rather than physical violence. It may represent the court of Kublai Khan, where running out of status results in disgrace and exile rather than explicit death. Perhaps the game is set in a shipwreck survival environment, where an abstracted amalgam of physical damage, exposure, starvation, and mental anguish are all part of the individual character’s well-being and represented by the health units. The entities players portray need not even be characters — a player may portray a starship, a society, or a super-intelligent shade of the color blue.

Heck, it doesn’t even require one sheet per player. What if the sheet represented a pirate vessel regardless of the number of players representing the crew? Perhaps the crew collectively makes decisions and the sheet simply records the capacities of the ship. A game like that would see the group dynamic inform the decision-making, and it wouldn’t even matter if the exact same player group made it to a weekly session, so long as one or more players were there to give the orders.

As the character attains progression, whatever that means in the game’s terms, the player simply adds another ability to the queue. As such, character prowess increases in tandem with durability.

That’s not always the intent, though. For durable characters who aren’t necessarily exceptionally competent, an “empty” health unit could simply have no ability tied to it. 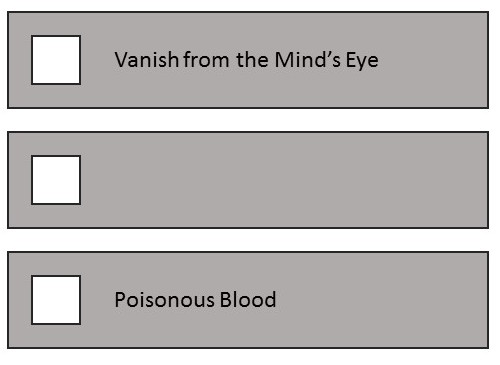 And a more fragile character could have a pair or more abilities associated with a single health unit. 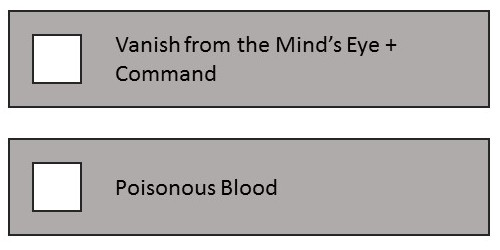 Hey, this doesn’t even have to be a character sheet. These could just as easily be ordered cards, colored beads, or whatever translates best to the game format.

Obviously, a character sheet represents the visual point of access for a player’s interaction with the game world. Even though this is a very simple design, it implies other systems. Without an actual game here, the below are impossible questions to answer at this state, but would be worthy of thought.

Ability functions: In order for using and losing abilities to be important, abilities need to be defined. As well, they may or may not need a resource to be expended in order to vary their frequency of use or scope of effect. Or, you know, maybe not. Maybe they just work.

Conflict resolution: What causes a player to lose those health/ exhaustion/ disgrace units, and their attached abilities? Do only ability inflict unity-ability damage? Or is there a fundamental action that operates free from those restrictions?

Attrition: Does player elimination occur? If not, when does the player return to play after the character loses all her health-ability units? Are there any associated penalties? How many of the player’s original capacities return, if any, and if not, what new capacities does she have? What other consequences occur?

Progression: By what method does the player acquire new ability-units? How are they selected or awarded?

6 thoughts on “Minimalist Character Sheet for an Undefined Game”